"Protest is only seen as fundamentally American when those who have long had the luxury of seeing themselves as prototypically American engage in it. When the dangerous and dark “other” does so, however, it isn’t viewed as normal or natural, let alone patriotic. Which is why Rush Limbaugh could say, this past week, that the Tea Parties are the first time since the Civil War that ordinary, common Americans stood up for their rights: a statement that erases the normalcy and “American-ness” of blacks in the civil rights struggle, not to mention women in the fight for suffrage and equality, working people in the fight for better working conditions, and LGBT folks as they struggle to be treated as full and equal human beings."

Inspired by someone else’s use of Lego as an iPad stand (http://coreymarion.posterous.com/lego-ipad-stand), I decided to fish through my dwindling Lego collection to see if I might have any pieces suitable for making an iPad stand for myself.

I had long since given away all the cool technic pieces, but surprisingly I found I could make a decent stable stand out of just 8 Lego pieces. Granted, two of the main pieces are fairly non-standard Lego fair. They’re legs from some Lego set I’ve long since forgotten, but were the proper angle for acting as a back support for the stand.

The two black angle shaped pieces are the front of the stand and hold the iPad in place. It's not the most esthetically pleasing design - some of the blocks are a few pegs too wide and coloring doesn't match - but given I no longer have 1000s of blocks to fish through, I'm happy with what I was able to find.

I’ll probably add a few extra pieces to the front to reinforce the two black blocks and reduce the risk of them popping off, but overall even in its current form, it’s quite stable, even with the iPad in portrait mode.

First wildflowers of the season 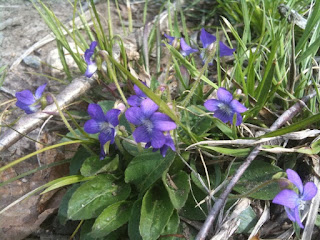