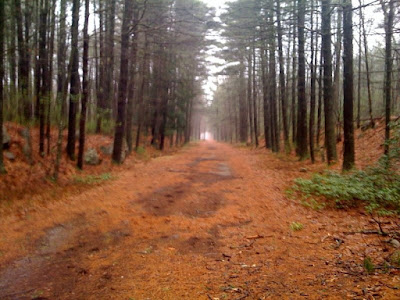 Slightly foggy path in the Douglas State Forest.
Links to this post My latest iPhone / iPod Touch app - called Artificial Life - is now available for purchase on iTunes. You can buy it here if you are interested. You can read many more details about it at my company web site:

This app has a somewhat long history. It's based on a program I was tinkering with about 7 years ago.

(Actually, there's a blog post about it buried in the archives here and another here back when I was revisiting the project and porting the code from my PC to my Mac.)

When I was first working on this, I had been inspired by the ideas of genetic algorithms. The idea behind genetic algorithms is to apply evolutionary techniques such as inheritance, mutation, and selection to computing problems. I thought, why not go full circle and apply these techniques to a basic biology simulation?

Anyhow, at the time, I had grand ideas for the program. I wanted to write it for the Palm Pilot PDA (remember those?) and thought it would be something neat to play with while killing time, and also, since the Palm has an infrared port (like a TV remote control), I thought it would be really cool to be able to "beam" the critters from the world to a friend nearby who was running the same program on their Palm PDA. As it turned out, my ideas were way too ambitious for the technology at the time - the Palm was just too slow. But now, fast forward 7 years and this is a feasible idea. And now, the screen is in color even!

So, this app represents my first pass at having the simulation on the iPhone. I have lots of ideas for future free enhancements to the app, including the ability to "beam" critters to other people running the app. But now, rather than using line-of-sight with IR, I will be able to send them across the world using the Internet! I haven't yet finished the "world-wide" sharing feature, but it's definitely on the TODO list for upgrades.
Links to this post 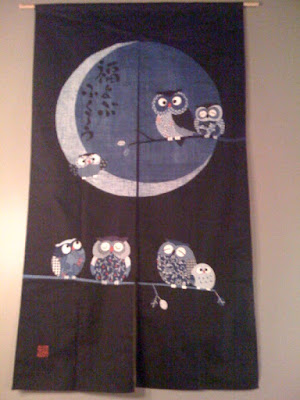 Picked this up in Okinawa in the markets off of Kokusai Dori back in
January. I finally got around to hanging it on a wall at home today.
Links to this post 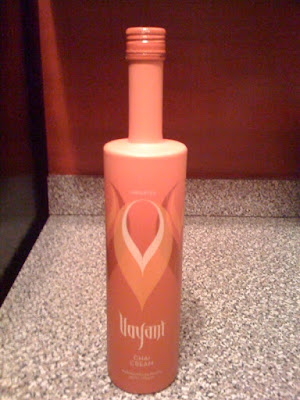 Dangerously tasty... A nice replacement for coffee syrup - with a kick.
Links to this post

I've recently discovered a downside to working on my own business. I'm pretty much working on computer programming projects 12 to 14 hours a day, 7 days a week, with a short 2 or 3 hour break on weekdays for my karate classes. I'm enjoying the work, which is why I'm voluntarily working this much, but I'm beginning to think this pace isn't mentally healthy.

The last few nights I've found I have been having a harder and harder time getting to sleep. Instead, I lay in bed with my mind racing to solve programming problems. Last night was the worst - I laid in bed for about 5 hours before I finally fell asleep.

I definitely need to cut back on the time spent programming and give my mind a break. I think I've taught my mind to concentrate so much on programming that that's all its in the habit of doing now.

This just reemphasizes a lot of the principles of Zen. It's my brain, yet I seem to have so little control over it. Gotta get back on track with that...
Links to this post
Newer Posts Older Posts Home
Subscribe to: Posts (Atom)