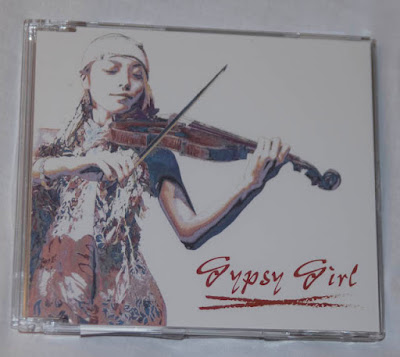 Wishing you all a happy new year... 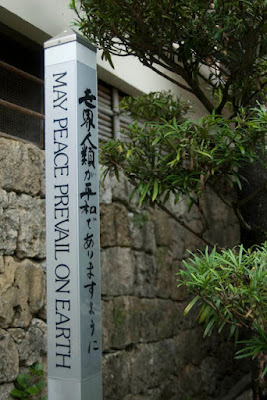 One thing you immediately notice in Okinawa is there are vending machines EVERYWHERE. You can be on some small street in the middle of a residential neighborhood and you'll be able to find a vending machine on the side of the street. Another point of interest is many of the vending machines serve both hot and cold drinks. So, you can get a hot can of coffee or a cold can of iced coffee from the same machine.

And here's something I'm pretty sure you'd never find in the US - you can get beer from some vending machines! 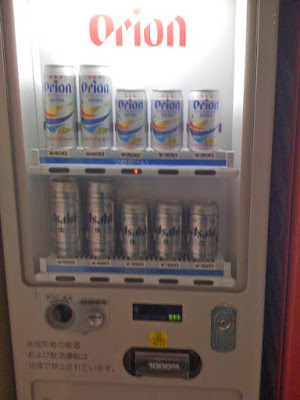 I'm finally getting around to filtering through some snapshots I've taken earlier in this trip. Here are a few I took while waiting for the flight from Osaka to Okinawa. 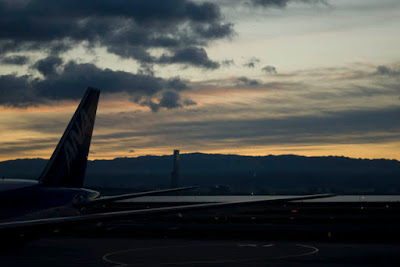 Since we were staying at the hotel at the airport, it was just a short walk to the terminal for our flight. We got there earliy enough to see the sunrise. 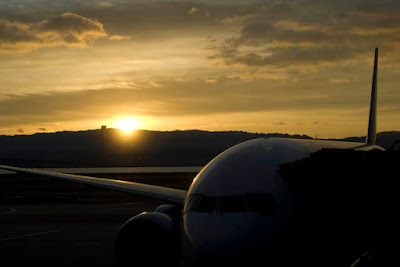 This last picture is of the interesting architectural design of the terminal windows. I think I may have taken a similar picture when I was here two and a half years go. 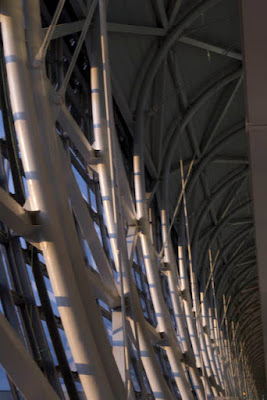 Merry Christmas! Being 13 hours ahead of the US, I get to experience Christmas "a day early". I was surprised that a lot of the stores in the area have Christmas decorations up and even a few Christmas trees. There's even the occasional Christmas tune playing, mostly instrumental only, and I got to hear a Japanese-language version of "Santa Clause is Coming to Town" in a local supermarket.

This is a snapshot I took from the roof of our hotel here in Okinawa City. The view is mostly a sea of concrete buildings, but you can see the ocean off in the distance. The hotel has a nice roof-top area with picnic tables. Surprisingly, there's no one ever up there. 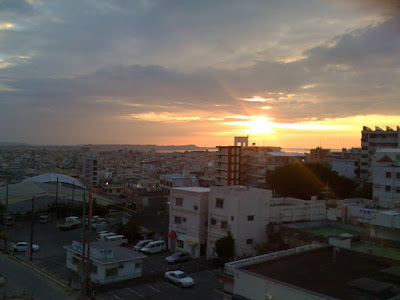 We're only here for two weeks, so the sensei at the dojo where we are training has offered to teach us every day while we are here - even on the weekends! We do get New Year's day off, though. Given the class schedule, that means I won't likely be posting many photographs from this trip as we won't be doing much site-seeing at all.
Links to this post

Ok, we're not really lost - just delayed. We were supposed to be in Okinawa by now, but the flight from Detroit to Osaka was delayed. We got to sit on the plane in Detriot for over 2 hours before we even left the ground. Add that to a 14 hour flight, and it makes for a lot of uncomfortable sitting in one place.

It's nice to finally be sitting in a nice comfy leather chair in a hotel lobby rather than a cramped space on a plane. (The hotel WiFi Internet is only accessible from the lobby).

Since we only had a 2 hour layover in Osaka, by the time we arrived, our flight to Okinawa had already departed. The ground crew members in Osaka were extremely friendly, helpful, and apologetic (in stark contrast to the usual treatment in USA airports). They put us up for a night in a hotel at the airport, gave us two complementary meals (dinner and breakfast) and some free minutes to make calls anywhere in the world to help alleviate the inconvenience. (I know the hotel and meals stuff is standard fair for missed flights, but the whole demeanor of the people and how they handled it was much more courteous than I'm used to. I had forgotten how so much of the Japanese culture seems to be oriented around courtesy. It's very refreshing.)

We made some quick calls to people expecting us in Okinawa tonight to let them know our change of schedule, had a nice meal at the hotel, and then wandered around the airport to get our bearings for tomorrow.

Hopefully our flight to Okinawa will be uneventful in the morning.
Links to this post

CVS has a nice little scam going in their photo printing department. I needed to get some passport photos for an international drivers license for an upcoming trip. I already had an appropriate photo - I just needed to print it out on glossy photo paper. I figured I'd try the photo printing kiosk at CSV since it's right down the street.

At first glance, the photo kiosk only offered standard sized pictures, 8x10, 4x6, 5x7, wallet sized, etc. There was no option to choose 2" x 2" which is required for passport-sized photos. Wallet sized photos didn't have an exact measurement size listed, so I wasn't going to take a chance with that.

I eventually asked the person in the photo department if there was an option for printing passport sized photos. It turns out there is, but is in a totally different section of the kiosk menu under something like "special features". Along with the "special feature" comes a "special" price - $7.99!! Holy smokes! This is a ridiculous price when a single 4x6 costs $0.19. To illustrate the crazy price even more, for $7.99, they give you one 4x6 picture with six 2" x 2" pictures in it! You have to cut them out yourself!

So, if you ever need passport photos, do yourself a favor and make your own composite 4x6 image using photo editing software and then just print out that 4x6 for $0.19 rather than getting scammed for $7.99.
Links to this post

A dog's understanding of fairness

There an interesting article on Wired.com about a recent study that claims to show dogs have an understanding of fairness. Basically, two dogs are asked to dog a trick ("give me your paw") but when only one gets a reward, the unrewarded dog stops doing the trick.

I thought it was a pretty good demonstration that dogs do have more complex emotions than a lot of people give them credit for, but one psychologist had this complaint about the study:

One such nonplussed scientist, Clive Wynne, a psychologist at the University of Florida, told the AP that he wasn't sure the experiment measured fairness at all.

"What it means is individuals are responding negatively to being treated less well," Wynne said.

To that I say, "Well, duh!" Isn't that basically what fairness is all about? Being "treated less well" is in fact the same as being treated unfairly. That's like me saying, "The study doesn't measure fairness at all. It only shows the dogs are responding differently when they are treated unfairly." Wouldn't that statement just be completely contradictory?
Links to this post

A waste of paper

It's that time of the year again when we get bombarded with catalogs in the mail. While I find the vast majority of these a total waste of paper and they usually end up in the recycle bin before even being read, there are a couple catalogs I enjoy reading. One of them is from REI - the outdoor supply store.

However, I was a bit disappointed by the most recent mailing from REI. At first glance, it appears to be a new holiday catalog, however, aside from the front and back outer cover, the catalog is page-for-page identical to the catalog they sent out a month ago! Talk about a complete waste of paper!

One could have hoped that an outdoor supply store would be a bit more environmentally conscious, but no, they're jumping on the holiday shopping bandwagon just like everyone else. They just churn out another 60+ page catalog with identical content from the previous month... Oh well. At least they used recycled paper.
Links to this post
Newer Posts Older Posts Home
Subscribe to: Posts (Atom)