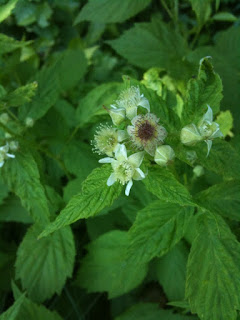 There are a large number of wild black raspberry brambles growing in
the backyard and based on the number of flowers, it looks like they'll
be bearing fruit this summer, too.

I had noticed them growing last summer, but since they were just
thorny brambles with no flowers, I wasn't certain they were raspberries.

Now I just have to make sure the dogs don't take a liking to them as
they have with the strawberries. 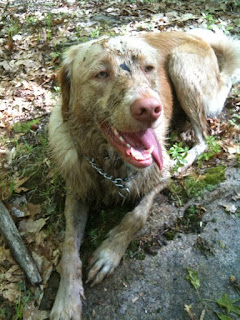 Guess who likes to play in the swamp...

Snapped these pictures of a mourning dove sitting in a tree outside the window.

Based on a recent comment made in jest with some friends, I was trying to take a picture of an ant. It proved more challenging than I expected. First I had to find an ant, and for some reason all the usual ant hang outs were ant-free. Second, once I found an ant, it wouldn't keep still. And those ants that did keep still would be quickly eaten by one of my dogs.

So, the above photo is about all I have to show for my efforts. It's way overexposed. The ant was in some dark shadows, so I used the built-in flash on my camera, which at such close range reflected back and blew out the light levels. The end result gave the picture a weird radioactive look when I adjusted the exposure in Lightroom.

Photoblogging without a computer 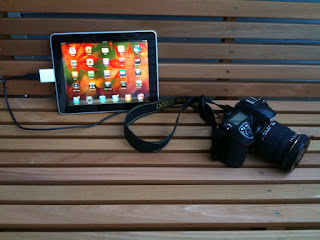 The previous Random Eyedull Photo post was made using just my Nikon D200 camera and an iPad. No other computer was used.

I used the iPad Camera Connection Kit to copy to photos off the camera and then used the handy free iPad app called PhotoPad. This app let's you do a handful of image edits, including cropping. And for free, you can't beat the price.

This is good news for when I'd like to travel and take higher quality photos than my iPhone allows and upload them remotely, but don't want to also take along a laptop. It's now easy for me to sort through the D200 photos, edit them, and upload some to my blog, all without a full computer.

(This post was also made from my iPad. I snapped the photo using my iPhone and then used the Camera Connection Kit to transfer the photo from iPhone to iPad. I could have just posted this from my iPhone, but the larger keyboard on the iPad makes for faster typing.) 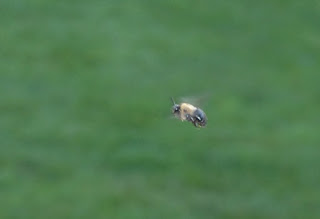 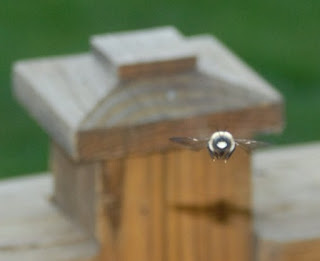 Tried to snap some pictures of a bee that is getting very territorial about my front deck.

Knot of the day: Monkey Fist 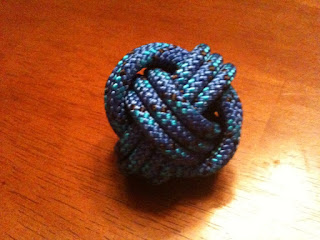 Working on learning a new knot each night. Today's is called the
monkey fist.

Originally used by fisherman for weighting a line (the knot can be
made around a lead ball or other weight), it also makes a nice
decorative knot.

Today I received the iPad Camera Connection Kit. As the name implies, it is designed for connecting a camera to the iPad for the purpose of importing photos. And that's the primary reason I bought it.

But, another point of interest for me was the kit provides a USB host port on the iPad. Although not really publicized, the USB functionality of the iPad allows it to act as both a USB function and a USB host controller (it is in function mode when docked with a PC/Mac and is in host mode when a camera or other device is attached to it).

As a result, when the camera kit adapter is connected, you can plug in all sorts of USB function devices, such as keyboards, USB headset, etc.

So this got me thinking... what other USB devices might work? One USB device I happened to have handy is an old Symbol barcode scanner. I plugged it in, and sure enough, it works!

This could potentially open up all sorts of ideas for using the iPad for workforce automation. Of course, this isn't an official use of the iPad Camera Connection Kit, and in fact, it does have some serious limitations as is. First, when the barcode scanner is initially plugged in, an alert pops up stating that the device is unsupported. Second, since the barcode scanner is identified as an input device, it prevents the onscreen keyboard from appearing. While plugged in, you are limited to only being able to input text data via the barcode scanner.

I don't expect to find myself keeping a barcode scanner plugged into my iPad all day, but if I did need to capture a bunch of barcodes while away from my PC, it is an option.

Now if they'd only come out with a version of Delicious Library for iPad...