I joined an iPhone cult 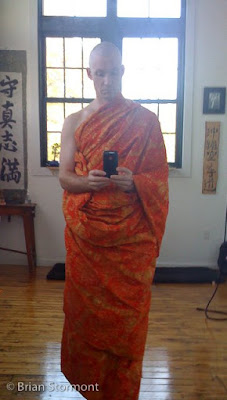 No, don't worry mom! I didn't really join a cult. I just went overboard with the idea for a Halloween costume...

...and yes, I really did shave my head. I figured I should try it at least once in my lifetime. I had never done it before.

I think I may have found my niche. As I mentioned yesterday, I'm really enjoying writing software on my own. And, I'm actually starting to see some money from some spin-offs on a project I originally did for free. So, it seems I just might be able to make a living doing this.

And, now, to make it even better, I found a non-profit application for my computer programming skills. It's still just in the discussion stages, but I'm been approached to make an iPhone app for a non-profit cause. I don't want to discuss the details right now since it's not a done deal, but if it does work out, it'll give me a chance to focus some energy on something positive for the community. And that's what I felt was lacking in my previous job. It paid well, but there was no working for the possible betterment of people's lives.

In my previous job, there would have been no way I could tell my boss, "Oh, sorry, I don't want to work on that right now, I'm busy developing some software for a non-profit." Now I can. Since I'm the boss, I can choose to set aside some of my time to work on non-profit projects or go do some volunteer work during the day. I know it will mean I'll potentialy be earning less money that week, but that's my choice. With a 9-to-5 job, I wouldn't really have such a choice.

So, hopefully I'll be able to keep enough money coming in to pay the bills while also being able to work on some non-profit software projects. Let's hope the plan works.

I've found I'm getting good at time travel. The problem is it's only in the forward direction and it seems to be going faster and faster. Ever since I quit my day job and started working on my own, time is just flying by.

I find I'm spending almost all my free time working on programming. It's very enjoyable, but I can't figure out where all the time is going. I'll sit down to tinker on an idea for a few minutes and the next thing I know it's dark out and I forgot to eat the previous two meals. I'm tempted to set up a video camera to figure out whether maybe I'm just blacking out for hours at a time.

But, at least I do have something to show for it. My base of iPhone code is building up and things are getting easier and easier to do now that I've become more familiar with the Apple Cocoa / Objective C development environment. Hopefully soon I'll have some more announcements about applications showing up in the iTunes App store.

In the mean time, I've found this blog has really been suffering for any significant content. No introspection, no interesting pictures, not much of anything. Sorry. If it's any consolation, I haven't even found any free time to play video games. And if you know me well, that's gotta sound hard to believe. I guess my obsession for problem solving and programming trumps video game playing - at least at the moment.

Hmmm... maybe I should write a video game program for the iPhone... (and join the thousands of other developers who are doing it; there are already over 1300 games in the iTunes App store. Woah!)

I'm pleased to announce that today's Providence Business News has an article about my first iPhone app - WRNI Radio. You can read the story here.

It turns out my D200 autofocus problem was something simple and I was able to fix it myself.

The autofocus mechanism on an SLR camera is driven by a small servo motor in the camera body. This motor turns what looks like a small flat-head screwdriver blade, which in turn turns a small screw set in the edge of the attached lens, and this turns the focus of the lens.

The problem with my camera was the driver was stuck down for some reason. It is normally spring loaded and is sticking out a bit, just enough to catch the screw in the lens when the lens is attached.

Here's a picture that illustrates it better than I can describe:

Anyhow, rather than sticking out like it is in this picture, the blade was recessed into the hole. So, I just took a very thin pointed tool and poked at the blade. When I pressed on it, it popped back out. I'm assuming when I originally turned on manual focus, the blade was retracted but then got stuck in that position for some reason.

Hopefully the problem won't occur again, but at least I now know it's pretty easy to correct.

The unexpected happened this afternoon. My Nikon D200 camera suddenly stopped working properly. It no longer auto-focuses. I had switched it to manual focus while experimenting trying to taking pictures of falling rain drops during a thunderstorm. When I switched it back to autofocus it no longer worked.

At first I suspected it was a problem with my lens, but I tried a different lens and get the same behavior - the autofocus motor whirs and whirs but the lens doesn't move.

Looks like I'll have to send it in for repair. Good thing I kept my older Nikon D50 as a backup. I wouldn't want to miss the chance at some prime fall weather photos.

I've been meaning to write about this in the past, but kept forgetting. As a hobby for about the past 35 years, my father has been carving birds out of wood. He started out making fairly simple ducks, but over the years has gotten a lot more skilled and now does much more intricate detailing.

Here are a few photos I took of some of his work from about 7 years ago. I should note that other than the branches or blocks of wood the birds are sitting on, everything in the piece is handmade and painted by my dad, including the blades of grass (made out of copper sheeting), stones, dragon fly, etc.

I'll have to track down other photos of his work and post it in the future.