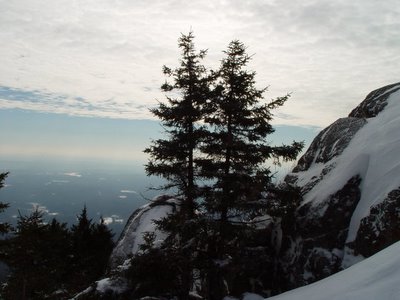 A group of friends are planning on hiking Mount Monadnock next Sunday (It's the world's second most climbed mountain!). Since this group is made up of many of the same people who went on the crazy kayak adventure last month, I thought it might be a good idea to scout out the trip in advance to get a better idea what was in store for us with the winter-like weather on the mountain.

So, two of us did the trip today - trying two different trails to get an idea what might be the best route for the full group. We took the most direct (i.e. steepest) route up - the White Dot trail - and even with slipping and sliding in the snow and ice, it took a wee bit under two hours to get to the summit. It was definitely made easier because one of us had trecking poles and the other was wearing crampons - without that extra gear you'd really have to climb on your hands and knees at many parts. For the trip down we took the Red Dot trail, which meanders a bit more along the ridge of the mountain. It was a less used trail, which made for a lot more fresh unpacked snow and a lot less ice. It was also a lot less steep, which made for easier walking. The main drawback is the trail is in the woods for a much longer time, so you only get the nice panoramic views close to the summit. Plus, since it is a longer meandering route, going down took us about 2 hours (same as it took going up on the direct route). Had we taken the White Dot trail down, it would have taken about an hour, although it would have been a lot more demanding with the ice covered rocks and probably a lot more stressful on the knees.

The weather on the mountain was near perfect - not too cold, around 32 degrees F at the base and about 18 degrees F on the summit, with lots of sun. Hopefully the weather will be just as good next week.

In this picture of the summit, for a sense of scale, you can see a person on the left making their way to the summit (look for the small black dot just above the tree line). Also, you can click on the image for a larger view. 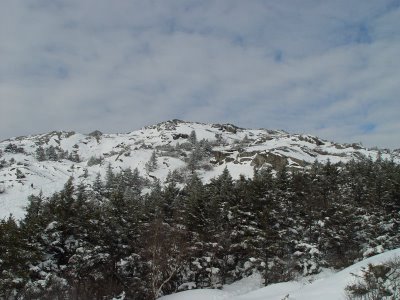 Ok, if you still can't make out the person, how about this? 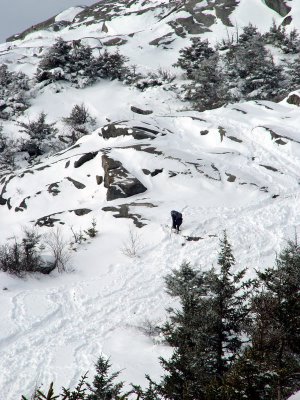