I've been kind of busy since I returned from Seattle a week and a half ago. I haven't really had much idle time, hence the lack of writing. One thing I should mention is my brother got married this past weekend. Congratulations Rob and Alison! 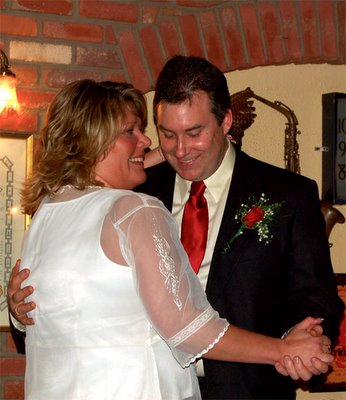 It's a somewhat interesting story. Rob and Alison originally dated for about a year about 25 years ago (back when they were both teenagers). Things didn't work out and they broke up and didn't really have any contact with each other after that. In the time they were apart, they both got married, had kids, and later got divorved. They then recently met up with each other again about 2 years ago. My nephew (one of Rob's sons) gave a pretty funny toast at the wedding. He was talking about "second chances" and how it's good Rob and Alison got a second chance to be together, but at the same time, for the kids sake (himself included), he was glad their relationship didn't work out the first time. It took some people a few seconds to get the joke.
Newer Post Older Post Home