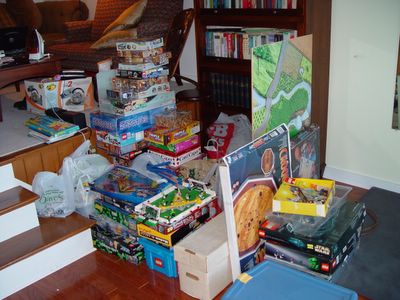 I'm trying to simplify my life. One of my weaknesses in the past has been if I see something in the store that interests me and I can afford it, I'll buy it. Several years ago I became a bit obsessed with acquiring Lego. As can be seen in this picture (which shows about 1/2 of my collection), I've accumulated quite a bit of it. I don't have a family to support, and have no debt other than my mortgage, so I didn't have any sort of inhibitors to get me to stop and think whether I really should be buying this stuff. In the back of my mind I think I might have been using an excuse that someday I might have a family and the kids would enjoy playing with the Lego, but this is even way to much stuff for a few kids, never mind one single adult.

Looking at it all piled in one place is pretty embarassing. Talk about being out of control! So, it's all going away. The stuff that is in unopened boxes will hopefully go to Toys for Tots or some other worthwhile cause like that, some will go to my nieces and nephews if my sisters give their approval and the kids are interested in it. Some will go to other friends of mine with kids. I'm still trying to figure out what to do with the Lego Mindstorms robotics and technic stuff. That's probably the hardest for me to part with since I actually tinkered with it quite a bit at one point in time. (If you do a search on Google for "lego" and "sensors", the web site with my lego tinkering is the second search result returned - and I haven't updated that site in years.)

So, anyway, the point of all this isn't really to talk about Lego but is instead to remind me to control my spending habits a bit and not just buy something because I want it at the time. I should concentrate on the things I really need... like that newest XBox 360 game system. (Ha ha... just kidding about that last bit, really.) Seriously, though, there are more worthwhile things I could be doing with my money rather than being so self-indulgent. It's sometimes hard to avoid the constant barrage of advertisements, but I think a much simpler lifestyle would be better for me. It's strange how the mind works though. I'll be perfectly content and then receive a catalog in the mail and suddenly I find myself thinking a want to buy some new item which before I saw it, I didn't even know it existed and hence didn't want it. Why is it a human impulse to want to acquire stuff? Even when you do get what you want, you then soon after find you want something else. It reminds me of a saying an economics professor (Dr. Yngve Ramstead) freshman year of college at URI concluded the class with at the end of the semester. I think he attributed it to Buddha and it was something along the lines of "True happiness is not having what you want, but wanting what you have." There was a recent pop song that also included a similar line, but my economics class was back around 1986, so the professor definitely wasn't quoting Sheryl Crow. Although I don't know if it really is a Buddhist quote, that saying is what initially piqued my interest in Buddhist philosophy. Not that I've been actively studying Buddhism for the past 20 years - it was just one of those things that got me thinking that I really ought to learn more about Buddhism some day since it seems to have some very good points of view for living life. 20 years later and now I'm finally starting to learn a bit more about it.
Newer Post Older Post Home