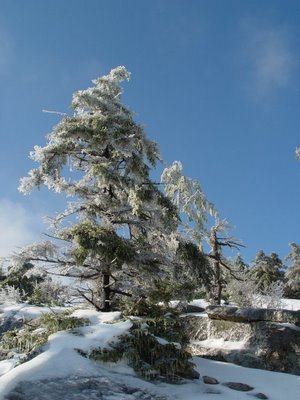 This past Sunday a group of us from the dojo made a trip to Mount Monadnock - the world's first or second most climbed mountain in the world (depending on who you ask). Mount Fuji used to be the undisputed "most climbed mountain" in the world but since they added an auto-road to the top, some now claim fewer people actually "climb" the mountain rather than just drive to the top in a car. In any case, Mount Monadnock gets climbed quite a bit - over 125,000 people a year or some rather large number like that. Seems like an awful lot of people. But at least in the winter it's pretty empty.

The weather on Sunday was great - nice and sunny with temperatures ranging from the mid thirties at the base to the mid twenties near the summit. There had been an ice storm on Friday, so everything had a nice ice glazing. Hiking below the tree line was fine since there was at least a foot of snow under the ice, but once we got above the tree line it was basically rock with a layer of ice. Not everyone in the group had crampons, so we decided to not try for the summit. No sense risking injury just to say we made it to the peak.

I took a large number of pictures - most of which can be seen here. (Note, there are 70 pcitures there) That link also contains some panorama images and their base source images before being stitched together, so if you are interested in seeing what the panorama pictures look like before they are built, take a look.

Here's a really wide example of one of the panoramas. It's made up of about 4 or 5 pictures stitched together. You can click on it for a large view, although you might then have to scroll left and right to see the whole thing.