I'm still wading through all the photos I took while out in Seattle. I'm finding I've reached a point where I don't know how to proceed. On the one hand, I'd like to take the time to make minor adjustments to different pictures - adjusting the brightness, or color, or sharpness, etc. But the problem I'm running into is I don't know where to stop. There are just so many photos, I start to wonder what the point is. It's not like anyone is going to want to look at 800+ pictures. But at the same time, the part of me that likes to have things fixed and in order feels this minor compusion to go through all the pictures and adjust them. But it's starting to feel like it's just not practical to spend that amount of time. And that makes me also wonder whether this digital technology that makes it so easy to take photo after photo might have a large hidden cost I hadn't anticipated. I had the mindset that a digital camera was great because you could just take a large number of photos without the cost of developing any film. But, there is a a potentially huge time cost involved since you can spend hours playing with the settings on just one photo. Multiply that by the number of photos taken and there's a very large cost in free time.

Another thing I'm wondering is this - what is my rational for making photographs? Are they meant to capture a memory, or create a pleasing image? For example, the following is a photo I took in Seattle. It was a somewhat hazy day, but across the lake you could faintly make out Mt. Rainier. This picture is a fairly accurate representation of what I actually saw. 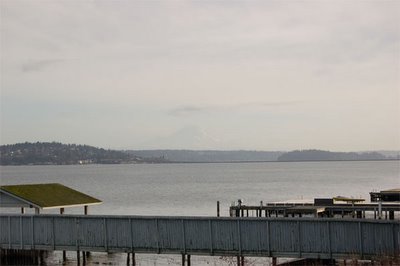 Since it was a hazy day, you really can't make out Mt. Rainier very well. However, if I adjust the color levels of the image, I get what appears to me to be a much more visually pleasing picture that looks like it was taken at sunset, but it isn't at all an accurate reflection of reality. 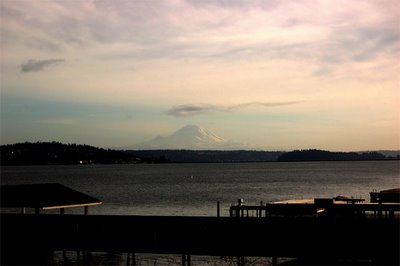 Is it still a photo, or has it now become something else? Should I care?
Newer Post Older Post Home