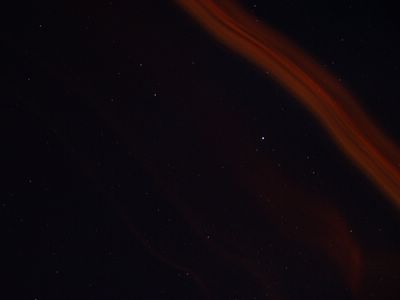 While in New Hampshire a few weeks ago, the night sky was incredibly clear, so I was goofing around with taking pictures of stars using my camera's ability to take long exposures. For this picture, I thought I had done a 20 second exposure when in fact it was a 30 second exposure. So, I grab the camera while it was still taking a picture and got this wavy red light across the picture. It almost looks like the northern lights, so I decided to keep the picture. I think the red blur came from some lights in a nearby house that the camera must have gotten a short view of while I was moving it.
Newer Post Older Post Home