Thanksgiving is by far my favorite holiday. There are no expectations for gifts or anything like that. It's the one major holiday that is just about getting together with family and being appreciative (i.e. thankful) for this thing called life. And yesterday was a very happy Thanksgiving day for me.

This year's Thanksgiving was at the home of one of my sisters - about 2 hours from where I live. Fortunately, I had company for the drive - I picked up my niece and nephew along the way and we listened to two new albums I had just purchased - one a "best of" by The Beautiful South and another was some Celtic music by Loreena McKennitt. Sadly, there was a bit of snow on the highway and on a couple occasions we did see a few cars that had spun out and were in the process of being rescued by tow trucks and state troopers. Hopefully for those folks their day turned out better than it started.

My sister lives in Topsfield, Massachusetts - a very old New England town. Before dinner, a few of us took a walk to a nearby historic house - the "Parson" Capen House, buit in 1683. 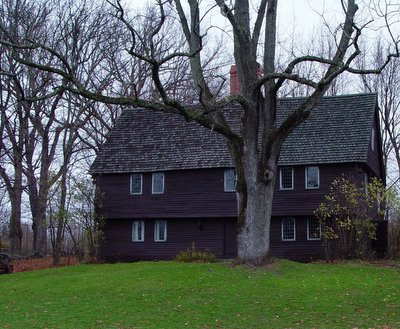 In the house they had some people in period dress who were talking about what life was like back in the 1600s. They also served us cider and popcorn. The house had a huge fireplace and also an interesting looking oven. 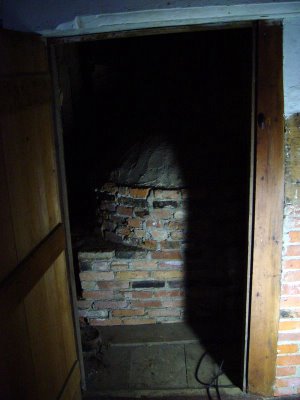 In the town commons area, there was a stone monument to honor some local residents who had unfortuntely been victims of the witch-hunts of the 1600s. Sad stuff. 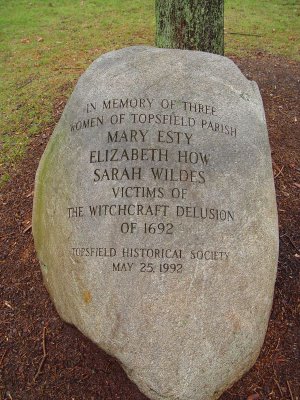 Back at my sister's house, some people were watching a dog show on TV. Oddly enough, even my sister's dog Lewis was interested in the show. 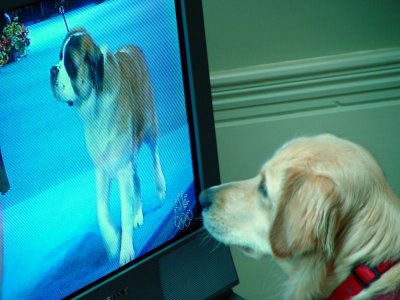 A group of us ended up playing a very fun board game before dinner. It's called Compatability. You split up into teams of two and each team member has an identical deck of cards with photos on them. A topic card is then randomly chosen which will have a word on it (such as "science fiction", or "failure", or "guide") and everyone will then select 5 cards that they think best match the theme word. You then compare the results with what your partner selected and get points for each match. There's lots of funny interaction as you try to figure out the reasoning behind some of your partner's picture choices.

Dinner was the usual Thanksgiving selection for my family - turkey, mashed potatos, stuffing, string beans, corn, broccolli casserole, rolls, and cranberry sauce. Even though I'm a vegetarian, I always feel I should at least try a small piece of turkey on Thanksgiving. I don't really like turkey, but for some reason I haven't quite thought out, I feel I should try it this one day a year.

After dinner, three of my young nieces put on a short show for the family. They had spent a lot of time in the morning preparing for it. They even set up a small "theater" with reserved seats for all the guests and a funky sequin carpeted aisle for people to walk down. 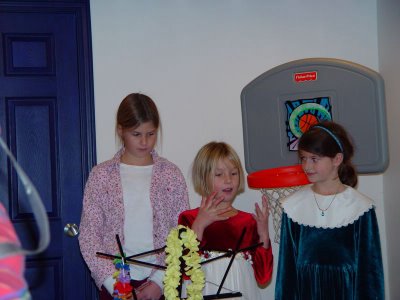 The theme of the show was Thanksgiving and consisted of little skits and poems. My nieces even gave out awards to people at the end of the show - such as one for thanking my sister for preparing the meal, another to one of my other sisters for appearing to be the most thankful for being invited to the show, etc. Heck. I even got two awards later in the afternoon. (If you can't read the small print, one award is for funniest singer and the other is for funniest dancer. I offer no explanation for why I got those. You'll have to use your imagination.) 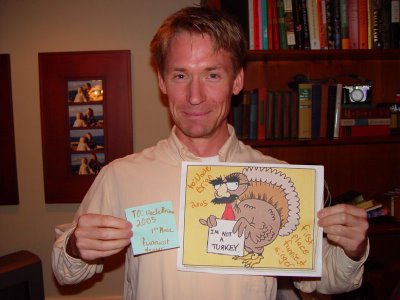 After the kids show, some of us played a rousing game of Time's Up! It's a team game where each person tries to get their partner to guess a name on a card. The names range from celebrities, to famous people in history, to fictional characters. Since some of the names might be obscure for kids (and a couple of my younger nieces and nephews were playing) we decided to take a few minutes before the game and think of our own "kid friendly" names to write on index cards. The game is played in three rounds - the first one you can say as much as you want to get your partner to guess the name. The second round, you can only say one word (but can also use sound effects and pantomime). The third round you can't say anything - you can only use sound effects and pantomime. What makes this game fun is the unexpected word associations and actions people will perform trying to get their partner to guess the name in later rounds. I still get a chuckle out of the image of my mom (who is in her mid-sixties) falling on the floor acting out having a house fall on top of her. She was trying to get someone to guess "Wicked Witch of the West", but we all just thought she must be pretending to have some sort of seizure. (And yes, for the record it was really the Wicked Witch of the EAST who had a house fall on her...)

While a group of us was playing Time's Up!, another group was playing Bausack, a very fun block stacking game.

After the board game silliness ended, then my family's true strangeness started to show. An acoustic guitar happened to be out in the living room, so a few of my nephews decided to have an improptu blues session. One nephew played the typical blues beat on the guitar while my other nephews wailed about their troubles in life. Lots of hilarity ensued as people would occasioanlly interrupt lines like "I got an F on my paper" and explain that that's not really a sad enough topic for the blues. So then we had slightly better attempts with lines like "My pet pig Arnold left me...." As I said, my family is strange. And if a blues jam session wasn't enough to top off a Thanksgiving day feast, what followed definitely was. My brother-in-law broke out the sheet music for some Beatles amd Paul McCartney music and began to play some tunes while other family members sang along. The night ended with everyone dancing and singing to a crazy rendition of "Twist and Shout". Even my dad - at the age of sixty nine - was seen doing an air guitar. Here's a picture that captures the moment pretty well. 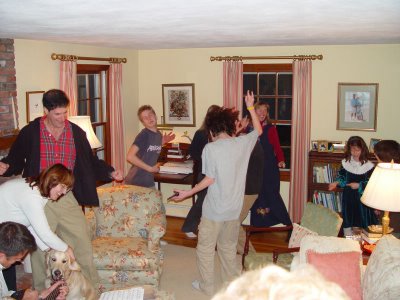 Even the drive home with my sister, niece, and nephew was fun. Key highlights were having a fairly lengthy karate discussion with my sister and later breaking out into a sing-along to "If I had $1000000" while listening to a greatest hits album by the Barenaked Ladies. (And for those out of the music loop, no - there are no ladies in the band, and no one is naked - it's just a silly band name.)

All-in-all, it was a very happy Thanksgiving. It made me realize how much I love my family, even if they are a bunch of crazy people. :-)
Newer Post Older Post Home