I took half the day off from work today to get a few things done. I ended up with a bit of unexpected free time late in the afternoon. It was a very nice bright sunny cold fall day, so I decided to take a short hike near where I live. I walked out to Rome Point. I hadn't gone there in a while on foot (I usually paddle out there via kayak) and was pleasantly surprised to see the town has finally added a small parking lot at the entrance to the trail. No longer do people have to take the risk of parking on the side of a busy road. It used to be especially dangerous in the winter with snow banks leaving very little space to park.

Rome Point is a wooded area off of Route 1A in North Kingstown. There are quite a few trails that meander through the woods with some going by old foundations, stone walls, etc. - i.e. it's typical New England woods. But what is atypical about this place and what makes it somewhat popular is it borders the ocean and is adjacent to the West Passage of Narragansett Bay. So, you can hike through the woods for a bit and then go for a walk on a rocky beach. And, the biggest draw is from November to May you have the chance to see harbor seals on the rocks off the point. (NOTE: you'll really need to bring binoculars to best see the seals.)

The actual hike to the beach is pretty short, although I managed to dilly-dally with my camera and binoculars making the round trip about and hour and a half. It's funny, I live within walking distance of this place and I haven't gone here for a hike in about 6 months. I had forgotten how nice and peaceful it is.

This is the view to the left when you first arrive at the beach. Off in the distance is Rome Point. 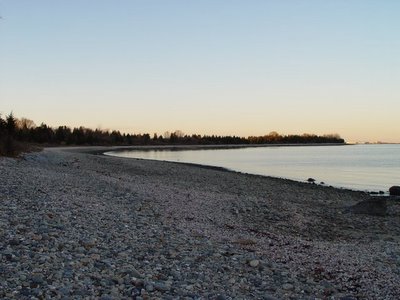 To the right you get a nice view of the Jamestown Bridge. In front of the bridge is also the Plum Beach Lighthouse, which I have paddled out to in my kayak in the past. 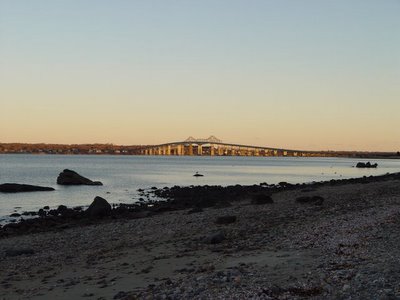 While walking the beach, I came across this weathered section of wood. It makes for a nice bench to just sit and enjoy the scenery. 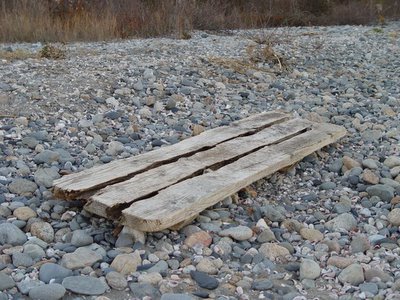 Parts of this beach were covered with seashells. The piles where at least a foot deep in some places! I'm not really sure what type of creature used to live in this type of shell, but there sure were a lot of them around here. 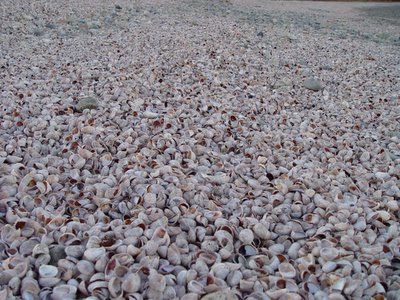 Along the trail going out to the point, there are some signs warning about the seals. The signs seem to imply that the seals might be right on the beach, although I've never seen them there. They have always been on the rocks about 100 yards off the shore. 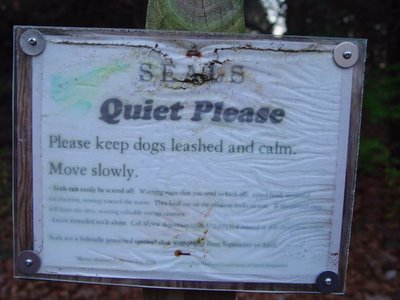 Here are the rocks off the shore and you can barely make out the seals on the rocks. (Click on the photo for a larger view.) 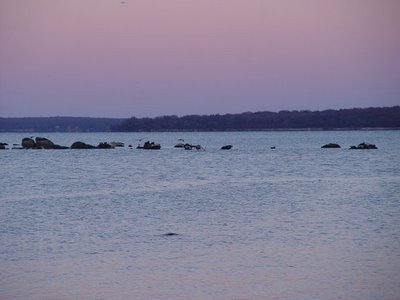 Here's is the best I could get with the zoom on my camera. Still it's hard to see the seals. That thing on the right that looks like a rock is actually a seal sitting on a rock that is just below the surface of the water. 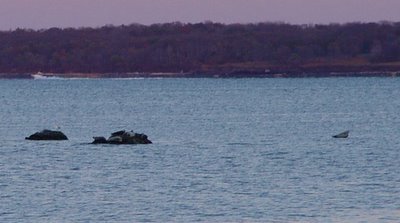 While watching the seals at the point, I noticed this HUGE ship going up the bay. I have no idea what it was. I've never really seen anything like it before. Here's a close-up of what it looked like. 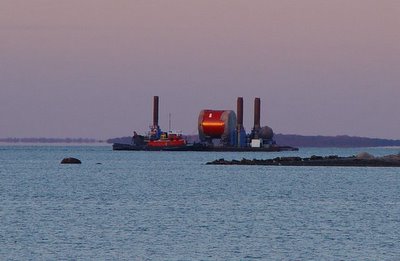 And here's a picture zoomed out to get a sense of how big it was. (You might need to click on this picture to get a slighter larger view.) 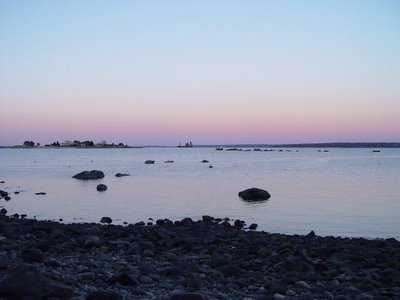 Whatever it was, it was being followed by a tug boat. Maybe to make sure it didn't get stuck anywhere.

After watching the seals and the mystery boat for a while, I noticed it was starting to get dark, so I headed back. In this picture, you can see the old mill building I live in off in the distance. It's close to a full moon and was low tide, so the water in the cove was mostly gone. Six hours from now and the water will be quite high. 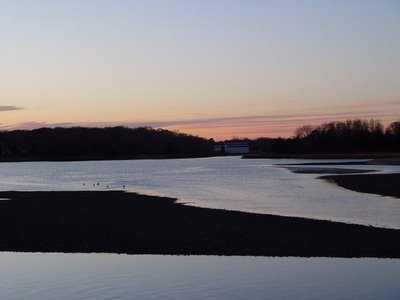 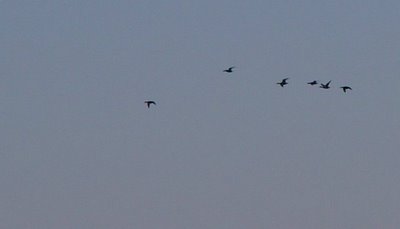