The main point of this trip to Okinawa is to practice Motobu Udun Di. It's a form of martial arts that involves a lot of joint manipulations along with rolling escapes (ukemi). There's a lot more to it than that (there's a whole kobudo/weapons system as well as a "hard" system of punches and kicks), but the "soft" joint manipulations and rolling is one of the main parts of this form of martial arts.

Today we were at the dojo for 7.5 hours. By the end of the practice, we could barely roll. We were rolling so badly, the sensei stopped and asked us both to demonstrate basic rolling across the room. Ug! Just what we needed - we were rolling badly because we were both in so much pain, and he asked us to roll some more! He also said we were rolling too loudly. That was because there were so many sore spots on our bodies, we instinctively used our hands or feet to slap the mat to absorb some of the impact so it wouldn't hurt so much. Oh well... must try harder.

These tatami mats are quite hard. They are basically made up of layers of tightly woven straw. Here's a picture of a cross section of one mat: 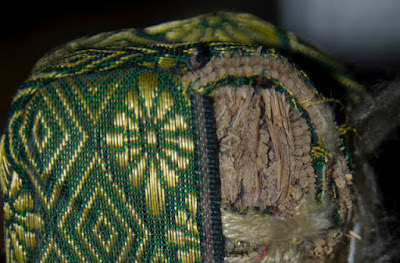 The mat pictured above is about 1.5 inches thick. These mats in the dojo are so old and compacted, it feels like the equivalent of rolling on a very thin carpet layered over a hardwood floor. There's something to be said for rolling on hard floors - it definitely encourages you to improve your rolling technique.

We only have one day left of class here in Okinawa. Rolling on the mats at home will feel like rolling on pillows.
Newer Post Older Post Home