We went to some castle ruins on the coast... I'll leave it up to you to choose a caption for this following picture (it might help if you click on the photo for a larger view to better see Aidan and Angie's facial expressions)... We were searching for a beach (guess why), and after following some winding narrows roads, we eventually came to a small overgrown path leading to the sea shore. Along the side of the path there was this sign. I'm not sure what it said, but it sure seemed important. This sign was much easier to understand and was much more entertaining. I forget when this was taken, but I found it amusing. Then Angie borrowed my camera and I ended up with lots of pictures like these. Phew! I got my camera back.
There were some people parasailing over the cliffs at the beach near Odo Coast. There were also a few people wandering on the coral hunting for stuff. This person was holding a big net, so I assume they were catching stuff to eat, although I'm not certain. Many of the people at this ocean spot weren't very friendly so I didn't find out what they were looking for. I said my best "konichiwa" to every person as I walked past them, and not a single person returned the greeting or even looked my way. While there was a large parking area for the beach, there weren't any signs or anything pointing out this area and we just discovered it by accident, so maybe the local people were disappointed to see Americans on their secret beach. While walking on the rocky beach, there were these small critters running around all over the place. They moved quite fast and it was kind of creepy. It was even creepier once I got a picture of one and saw what it looked like up close. 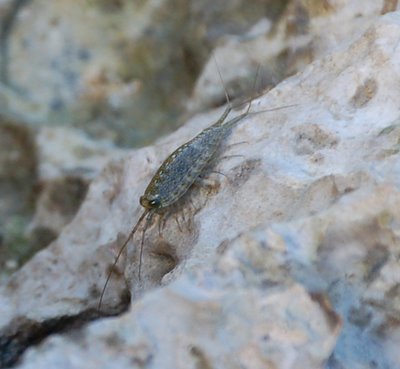 Uh oh. Angie took the camera again.... Can you guess who isn't afraid of the sun? Angie took a really cool picture of a colorful hermit crab. I've never seen one with blue eyes before. 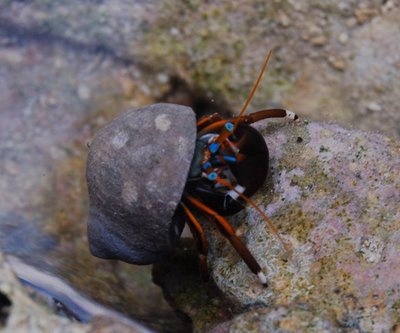 At night we went to Kokusai Dori, a crazy street in Naha with all sorts of shops and stores. At night it's quite colorful with all the signs lit up. I had the best vegetable yakisoba at a little shop on the street. It only had two tables in it and some stools along the counter where the food was being cooked. I was surprised there was no one else in the place since the food was sooo "oishii" (delicious). It was so good we went back again on Friday night.

At the parking garage, there was this funky picture advertising a tatoo studio. No, no one got any new tatoos (yet)... I'm a day behind in my updates. Hopefully I'll get a chance to write some more later today about what we did yesterday (Friday).
Newer Post Older Post Home