In honor of the somewhat politically incorrect Rhode Island holiday, Victory Day (guess what the victory is), my family had a get together over the long weekend at my sister's house up in Wolfeboro, New Hampshire.

As part of the weekend festivities, a friendly competition was held between the two factions of visitors - those sleeping at the lakeside and those staying at lodging away from the lake. There were about 12 people on a team.

The competition started with a scavenger hunt that involved finding items in town - as many banks, realtors, and churches as possible, various more specific objects (like all the locations that have a bear or moose), and then the more usual scavenger hunt items (like find a feather, a clam shell, etc.)

The scavenger hunt ran for two days. On the second day (Sunday), my sister organized a whole series of competitions for the two groups - some involving individual team members (such as the pie eating contest and the underwater endurance test) and other events involving groups of team members (such as volleyball, bocce, and the water balloon toss). There were also some slightly more outlandish feats of skill, such as the peanut butter and jelly swim relay race (where a sandwich is built along the race and the final result is the person at the finish line has to eat a very soggy pb&j sandwich).

Not knowing there was this competition planned, I had invited two friends of mine to come up for the weekend to hang out. I had explained to them how things are really casual with my family - there's no organized events - people just do their own thing, maybe have a pickup game of volleyball, or wander into town, or go kayaking, etc. So, it came as a surprise to all three of us when my sister passed out a schedule on Saturday night outlining the events for the next day. It was especially surprising when the schedule looked like this (click on the picture for a larger view): 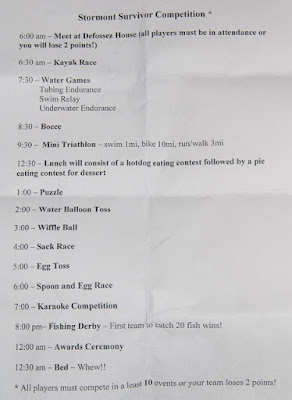 Needless to say, after reading some of the descriptions of the events, it was obviously a joke. But, it was funny to hear people initially start complaining about the 6:00am start time, and then hear people start laughing at some of the more ridiculous contests.

After things settled down, my sister then passed out the real schedule, which looked like this: 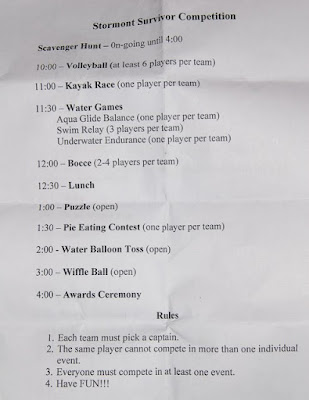 That was a much more reasonable schedule and it turned out to be a very fun time.

For the record, the Outcasts (we were the non-lake lodging people) defeated the Silverback Wolverine Monkeys in an extremely close match. After all the points from all the contests were tallied, we won by only one point.

We then had an awards ceremony where everyone hummed the olympic awards theme music while my sister hung the gold medals around the winning team members' necks.

Yeah, my family is crazy. I love 'em!

As captain of the winning team, I get to be keeper of the "Stormont Survivors" trophy for the year (pictured below). Hopefully it doesn't come with a curse like the blue bird did. (Just kidding Mom! Really! Please don't ban the trophy!)