Unfortunately, it's taking a bit longer than I expected for my hand to get better. I got the stitches out on Thursday morning. The orthopedic specialist rechecked the lack of feeling in my finger and he remains convinced that the feeling should come back eventually on it's own without the need for surgery. I asked doctor if I needed to worry about the wound re-opening and he said since it had been 11 days, I would have to be pretty strong to flex the skin enough to open it. Well, wouldn't you know? I guess I'm mighty strong. While driving back to work from the doctor's office, the skin began to come apart.

When I got back to work, I put some Neosporin on the cut just to make sure it wouldn't get infected and I then covered it with a bandage. It turns out that moistened the cut enough for the whole thing to split open over the next hour. I got to take a good look around inside and it looked pretty nasty to me. It was all gooey and there were large sections of white stuff inside. I thought it might be infected, so later that afternoon I went back to the office where I originally got the stitches. I saw a different doctor there and she said since it was originally such a deep cut and it's in the palm of my hand and is constantly getting flexed, it was normal that the outer layer hadn't yet fully healed. She also said the white stuff inside was just dead skin that had been trapped inside when the wound was stitched up and everything looked good. She then just put some small strips of tape over the cut to hold it together and advised I leave the tape on there until the cut holds together on its own.

The tape fell off later that night, so I then went to the local drug store and found some funky new Bandaid finger wraps that looked like they might work well for holding the cut closed. Unlike the conventional bandages that have a pad in the middle, this is just all stretchy rubber material. It almost looks like Goretex. Even though it is rubber-like and flexible, it is also absorbent and breathable, so the underlying skin doesn't turn all white from too much moisture getting trapped underneath. And so far, the bandage has held pretty well. I can make a fist and flex my hand and the cut stays held together. This is what it looks like now (with the new Bandaid finger wrap bandage taping it shut):

It does look a lot better, but what bothers me is it is still very sensitive. If I just bend my hand a certain way, or accidentally bump the area where the cut is, I get an electric shock-like feeling in my finger - sorta like the feeling when you bump your funny bone really hard. It's a bit discouraging since there are many things I still can't do in karate. One of my favorite things is the weapons class, and I haven't been able to take the class since the accident. I've done a few test runs of trying to do some bo kata, but just when I start to get confident everything is ok, I suddenly get a nasty jolt of pain in my hand and I have to stop rather than push my luck. I'm hoping once the skin is finally fully sealed it won't be so sensitive, but nerve damage tends to take a long time to recover, so if I think about it too much I tend to start to feel a bit down.

And I've found a good escape from feeling down is to do something else so I don't think about it. So this afternoon I decided to go running. Both my feet still work quite well, so I may as make good use of them. It was raining a bit when I headed out, but I enjoy the rain when the weather is warm, so I figured I'd try a somewhat long run and go out to Rome Point. It's not really that long, actually, but I haven't been running in a while, so it seemed like it might be a long run. As it turns out, the whole loop only took me 40 minutes. The last 20 minutes of the run were a lot of fun. It started to rain really really hard. Even though I was wearing water-proof trail running shoes, it didn't really help since they filled up with water from the water running down my legs. By the time I got back, I was completely soaked. I was so wet, I had to get changed while standing in the bathtub to avoid getting water all over the place in my condo. Once I was dry, I then checked a map to figure out how far I had actually run. It turns out it wasn't very far - only 4.73 miles. Since it took me 40 minutes, that means I averaged 7 miles per hour - I have no idea if that is a good pace or not, I'm thinking it might be a bit on the slow side. You can see the route here: 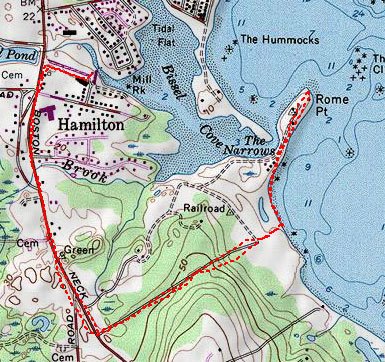