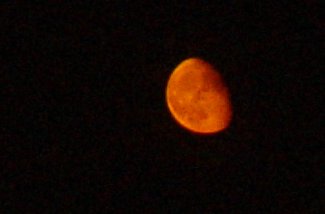 The moon was a nice red color while it was rising last night. Coincidentally, this morning I was reading a book on the history of science and came across an explanation of this effect. It's called the 'Tyndall effect' and is named after a British physicist John Tyndall (1820 - 1893). He explained why the sky is blue during the day and why the sun appears red when it sets. The sky is blue because large molecules in the atmosphere scatter the blue light from the sun. When the sun is setting, the light passes through more of the earth's atmosphere before it reaches your eye, so the shorter wavelength colors are filtered out more than the long wavelength color of red - making the sun appear red. If you are interested, this NASA web site has a pretty good explanation of the colors and how they relate to wavelengths: eosweb.larc.nasa.gov/EDDOCS/Wavelengths_for_Colors.html

Tyndall is also famous for pointing out how variations in the amount of water vapor and carbon dioxide in the atmosphere can lead to climate changes - now known as the greenhouse effect.
Newer Post Older Post Home