Plenty of Exercise this Weekend

This was a fairly active weekend. I had two karate classes Saturday morning, then went to Scarborough Beach to meet a friend from karate for some kayaking in the surf. My friend is crazy - he didn't wear a wet suit - just swimming shorts and a life jacket. And he claims he wasn't cold. I opted for a cold-water winter wet suit with boots and gloves. Wearing that I was quite warm and comfortable, although I must admit the first time paddling out into the oncoming waves I was terrified. I have been kayak surfing in the summer and know it's inevitable that I'll roll my kayak in the surf - especially trying to ride waves in a 17' sea kayak. So I knew I was going to go under water and I didn't know what to expect for the feeling of being dunked into 42 degree water. As it turns out, the wet suit did its job and kept me very warm, but the first run out I chose to not wear my wet suit hood, so when I flipped and went under water, I instantly got one of those "ice cream" head aches. Ow ow ow! From then on I wore the wet suit hood to keep my head warm. All-in-all, it was a very fun time riding the waves and having the beach completely to ourselves. The beach is quite nice in the winter. Unfortunately, I didn't bring my camera, so I don't have any pictures of the kayaking.

Today a different friend from karate and I went back to hike Mount Mondanock. The weather had been a bit warm and rainy a couple of weeks ago and a lot of the earlier snow that was on the mountain has washed away. Things have improved a little bit this week and there is a bit more snow on the ground again. When we arrrive at the mountain it was snowing, and it didn't look like there would be much visibility (you couldn't even see any of the mountain from the base), so I chose to leave my camera behind. As we neared the summit, there was an occasional break in the clouds, which is when I snapped this picture using my mobile phone. (Sorry it's pretty poor quality - its supposed to be a picture of a bunch of snow covered trees.) Next time I'll put up with the extra weight and bring the real camera along. 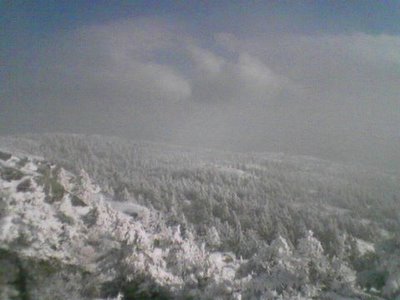 The summit itself was pretty much in the clouds when we reached it, so much so that we walked right past the high point at first since we didn't recognize it in the poor visibility. At times you could only see about 50 feet or so in front of you.

We had started out a bit earlier on this hike (compared to the two previous Monadnock climbs) and decided to explore and take a new trail down from the summit. We were hoping for a chance to use our snow shoes, and it wasn't practicial on the main trails since the snow is already packed down from all the traffic, so we tried to pick a trail that hadn't gotten much use - the Spellman Trail. As it turns out, this turned out to be a very interesting trail. The trail is normally marked by paint spots on rocks, and all the rocks were covered with snow, so we mainly relied on following the footprints of some previous hikers. At one point, we met up with a group of three hikers who were coming up the trail. They were cursing among themselves - one claiming this wasn't the real trail, another disagreeing using all sorts of colorful language. From what we had seen so far coming down the mountain, the trail seemed fine, but the group of three seemed to think there was something seriously wrong with the trail they had just climbed and warned us not to continue in that direction unless we had ice axes and crampons. They then continued on their way up the trail arguing and swearing at each other all the way. After that encounter, Rob and I were curious about how bad the trail down below could be. We both had crampons in our packs, but no ice axes, but really didn't think the trail would warrant the use of ice axes. Besides, we did have trecking poles which are quite useful in walking down steep inclines. After a hundred feet or so down the trail, we saw what we thought caused the hub bub with the other hikers. We came to a very steep point in the trail. It didn't look extremely difficult, but it was steeper than anything else we had seen so far. Rob started down it and at one point slipped and tumbled a bit down the slope. I was off to the side still higher up on the trail, and I had a really nice view of a ledge he was rolling towards. All I could do was yell "Who! Whoa! Whoa!" - I was too far away to do anything else more useful. Fortunately, he managed to stop just before the ledge. As it turns out, falling off the ledge would have led to a 20 foot drop or so onto some large pointy snow cover rocks. Ouch!

This ledge was the part of the trail the other hikers must have been referrring to about needing crampons and ice axes. You basically had to climb down the face of a rock for about 20 or 30 feet. Cool! That's the kind of stuff you hope to find while climnbing a mountain in the snow, isn't it? While it did look like fun, we did have to agree this probably is not the normal route of the Spellman Trail. I don't think the normal trails usually have people scaling rock faces. Since it was so steep, it wasn't really safe to try to climb down while wearing our heavy backbacks. Rob had come prepared and had a length of rope which we used to lower our packs. Then we both carefully scaled down the steep slope using our crampons.