The Bluebird of Change

I've been thinking about writing about this topic for a while, and since I just discovered today is Friday the 13th, I figured what better day to write about a family superstition?

Let me start by saying I am not a superstitious person, nor do I believe in curses or magic or anything like that. I just think this is an interesting set of coincidences that makes for a funny true story.

My family has a tradition of getting together every Christmas-eve for a smorgasbord - a somewhat traditional Swedish Christmas meal. As part of the meal, we would always have rice pudding and hidden in the pudding would be one almond. The family tradition was whoever got the almond would have good luck for the next year. (I think the real Swedish tradition was the person to get the almond was to get married within the year, but that didn't work for a family with a bunch of young kids...) So, as a kid, I remember always looking forward to having the rice pudding at the end of the night, quickly digging through looking for an almond, being disappointed when I didn't find it, and then discarding the pudding because I didn't really like the stuff. (I should note I now like the pudding quite a bit - I guess it's something you appreciate more when you get older. None of my young nieces or nephews seem to eat it either. Just like when I was a kid, they just look for the almond.)

Anyhow, at some point in time in the mid 1990's my mom decided it might be nice to expand on the family tradition and get something to give the person who got the almond - just something simple, but nice, that could be kept for the year and then given to the next person the next Christmas-eve. She chose a simple glass bluebird, which we called the bluebird of happiness: 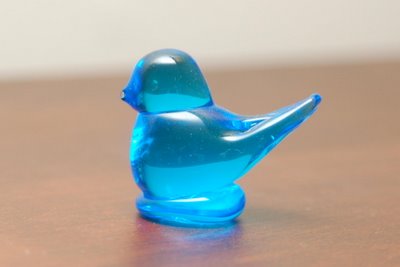 Unfortunately, once we started this new addition to the tradition, it seemed the bluebird had it's own interpretation of what people needed for happiness. It seemed everyone who got it had their current relationship end within the year. My brother got divorced, a friend of the family had a ten-plus year long relationship end, and I split up with my girl-friend of 10 years. We started jokingly calling it the bluebird of change rather than the bluebird of happiness. It got to the point where people were hoping they didn't get the almond at Christmas-eve. Since I am not superstitious, the last year were did this tradition, when the father of my fiance at the time got the almond, he ended up giving the bluebird to me. And what do you think happened? That year my fiance and I split up.

After that happened, no one wanted to see the bluebird again. So I've kept it ever since. I've had it for 5 years now and I've not been in any new romantic relationship since. Coincidence? Of course it is!

But... I still ponder the idea of selling the bluebird on eBay with the description of "Cursed bluebird for sale. Guaranteed to end your current relationship within a year!" just to see if anyone would be interested in buying such an item.

Although, I must admit, I can't really sell it. It's a great conversation piece.
Newer Post Older Post Home